17 March 2009 - update 2: Don'tCallmeDave got an answer to his question at this week's Hendon Residents' Forum. The answer revealed that Michael Whitney Freer himself banned half of all the comments that residents of Barnet - who pay his considerable wages and for his 'Leader Lectures' blog - put on his blog.
What has he got to hide in answering these questions? What scares him so much that he daren't even publish them? To coin a phrase, "Is he frit?"
Update: One day on, no sign of the questions..... 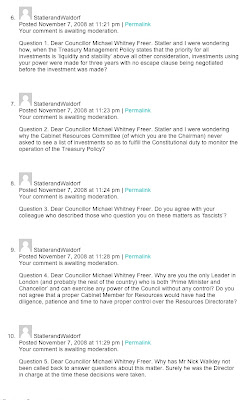 Statler and I have received an email from one of our many kind correspondents. She pointed out that Councillor Michael Whitney Freer is answering questions from all comers at his new website (much to Councillor Coleman's consternation). We have asked 5 questions, see them below. Will OGLL ban them?
Posted by Statler and Waldorf at 10:00 AM