Statement from Statler and Waldorf

Today 'Johnny come lately' webblogger, Roger Charles Doughty Tichborne, has published a photograph on his internet journal which suggests that Mr Nick Walkey has appointed us to his Cabinet of Councillors.

We are unable to confirm or deny this but can let you know discussions are taking place regarding an appropriate package and use of the Mayoral car.

<ENDS>
Posted by Statler and Waldorf at 6:48 AM No comments:

A very Merry Christmas from Statler and Waldorf

Waldorf and I are huge fans of Les Miserables. We were lucky enough to get tickets for the opening night at the Barbican Theatre, back in 1985, and have been addicted ever since. As a free gift to all of our loyal readers we give you one of our favourite scenes (first 40 seconds is introduction).


UPDATE: Waldorf and I have been unindated with emails from readers guffawing with laughter watching the clip imagining Monsieur Thenardier as Brian Coleman or Andreas Tambourides and Madame Thenardier as Lynne Hillan or Joanna Tambourides. Waldorf and I can only condemn such wicked thoughts in the minds of our readers. Really.

Now who could possibly say that of any of our Barnet politicians?
Posted by Statler and Waldorf at 8:13 AM 5 comments:

Statler and I have been receiving frantic telegrams and carrier pidgeon messages about the Grant Thornton report condemning the handling of the Future Shape program.

Unconfirmed rumours suggest that Andreas 'Hit Man' Tambourides has instructed fellow Conservatives on Audit Committee that they are not allowed to embarass Lynne Hillan / Howard or the Officers by asking any questions on the report at the meeting. Only questions that have been approved by the Officers can be asked. If Conservatives on this Committee tomorrow night are strangely quiet, you will know why.

We are also trying to get a comment from Department for Communities as to whether it is true that they are appointing an independent investigation to look into goings in at Barnet Council in the wake of this scathing report.

Johnny come lately, weblogger, Roger Tichbourne has posted here and here on the growing crisis. Statler and I are befuddled as to how a 'politically neutral' Officer of the Council has seemingly become a major player in the public debate between Councillors and Mr Tichbourne.

Statler and I are in no doubt that Cllrs Marshall and Harper will be getting ready to claim their crown very shortly...
Posted by Statler and Waldorf at 4:13 PM 1 comment:

A moment of silence please

Statler and I have been informed that our erstwhile colleague of many years, Mr Brian Reynolds, has been pushed out by Nick Walkley and his stormtroopers decided to move on to other opportunities which coincided with Mr Walkley restructuring his top team.

We wish the clapped out old wooly hatted, thermos carrying commie great man, with a wealth of experience in local government and a staunch reputation for political neutrality, all the best in his staring out of the window from his front room future endeavours.

Those with an interest in these matters can read about the restructure what the Council thinks you should be allowed to see here. 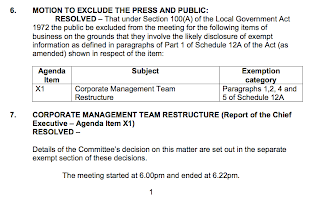 Statler and I have posted an excerpt from the minutes above showing how far Barnet Council is truly embracing the coalition goverment's approach to transparency.
Posted by Statler and Waldorf at 4:01 PM 6 comments:

Fiddlesticks! We were one vote out...

Statler and I have been kicking our big brown wooden clockwork Predicting Machine this morning. The damn thing is clearly faulty as it was a whole vote out from getting Lynne Hillan's vote correct. Maybe we are being too harsh as we chose not to pay the extra £5,633 for the Global Positioning System Device add on that would have alerted it to the fact that Alison Cornelius was in Strasbourg and hence unable to vote for her cherished friend, Lynne.
Posted by Statler and Waldorf at 2:46 AM 1 comment:

Which Councillors will face the chop in Hillan's new wheeze : compulsory deselections?


...There is a national scheme looking at whether it should be three councillors per ward or maybe it should be two, that would shrink the pot immediately.

is being worked up now. Increasingly confident of victory against young padawan, Mark Shooter, contacts have apparently already been made with the Boundary Commission for England.

We understand Ms Hillan / Howard plans to move fast to reassert her crumbling authority as soon as the Annual Group Meeting is over. The Council has received very positive mood music from the Boundary Commission and, apparently, this move could be expedited as parliament is also moving fast with parliamentary boundary changes. Two Councillors per ward would be in place for 2014 with 'compulsory deselections', here are our predictions for those who Hillan would force out using this new wheeze.

Brunswick Park : Lisa Rutter (easy guess this one!)
East Barnet : Barry Evangeli (despite brown nosing Ms Hillan, his ward colleagues would win out)
Edgware : Darrel Yawitch (Statler and I predict in this one it will be last in first out!)
Finchley Church End : Graham Old (Eva Greenspan and Dan Thomas have too strong a following)
Hale : Tom 'Boombastic' Davey (Hugh Rayner has played both sides well and will be safe and Brian Gordon has too deep roots to budge him)
Hendon : Mark Shooter (Maureen Braun is a rock solid Hillanite and Anthony Finn is well established. Hillan will teach Shooter a lesson for daring to take her on)
High Barnet : David Longstaff (The Two Fat Ladies (TM) will not be for moving)
Mill Hill : Brian Schama (just for having the temerity to challenge one of the Fat Ladies (TM))
Oakleigh : Brian Salinger (Hillan's victory over her old adversary would be complete)
Totteridge : Brian Coleman (Lord and Lady Cornelius are simply too well entrenched there. It would suit Hillan to be rid of Coleman now he had outlived his usefulness. The truth is he already knows this...

So there are our predictions. You will know if we are right in 18 months, not too long to wait. What do you think? Comment below.
Posted by Statler and Waldorf at 4:08 PM 3 comments:

The twenty Conservative Councillors we think are sure to back Hillan

Statler and I are still trying to find out about this young padawan, Shooter, but in the meantime we are putting our minds to how he can possibly win. It would need an earthquake. This Conservative Group, certainly the Chipping Barnet Councillors, was hand designed by Lynne Hillan/Howard, Brian Coleman and Michael Whitney Freer for the sole purpose of removing Brian Salinger in 2006. In a stepford wives kind of way they are programmed to love their Leader.

For this upstart, Shooter, to win he needs 20 votes (unless there are abstentions). So Statler and I, after catching up on Home and Away thought we would speculate on the 20 Conservative Group Councillors most loyal to Lynne Howard/Hillan (depends who's asking (tm)).
This is not intended to be an exhaustive list and we have left off many new Councillors who we haven't had time to observe or hear reports about to confidently speculate about.

So, chaps and chappesses, what do you think of our fantasy Conservative Group speculation? Which names do you think we have right? Which names have we got wrong? Comment away below - we expect, nee demand, strong debate.

Are one of these Councillors your local Councillors? Do you know then in another context? Why not email them and ask them who they are supporting and why?

Of to bed now, after a creme de menthe...
Posted by Statler and Waldorf at 5:30 PM 6 comments: