For starters a new Mayor, main course an inflation busting Council Tax increase and for desert, 15%+ pay increases for the highest paid Councillors? 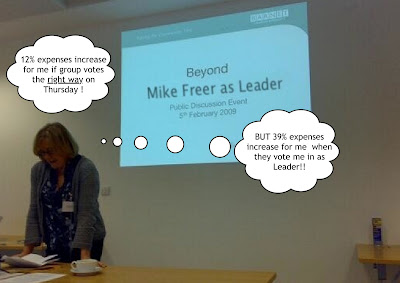 (Photo (c) 2009 Barnet Council, thanks for making it available.)

Statler and I are gentle and nurturing folk. We are glad and humbled to see the many new webloggers in Barnet's blogosphere. Why, even Michael Whitney Freer is at it, and Twittering too (well that is twittering more than usual).

We wouldn't like to steal the limelight and so we have left things to flourish a bit.

This afternoon Waldorf had a very unfortunate experience with his Garibaldi biscuit. Waldorf was very exited (a little too exited) as he had found the Margaret Thatcher archive pages on the BBC. To cool himself down, he was surfing the Council's website, reading the papers for the Council Meeting on March 3rd.

Waldorf is already very p****d off that the "all party coalition" at Barnet Town Hall is not following the radical 'true blue' Councils across London. This Council meeting will set the Council Tax for this year. Councillors are set to impose an increase many times the RPI to hard pressed, hard working families in Barnet who are already struggling to keep their head above water.

I then heard a choking noise from across the room. Waldorf was going blue, quickly I administered the Heimlich Maneuver. After the gasping had subsided, Waldorf explained that he had found the report at the end of the Council papers proposing 15%+ increases for the most highly paid Councillors. I didn't believe that Barnet Council's bureaucrats could have been involved in creating a report at this time proposing that, but it seems it is so.

After getting out my abacus, here are some of the biggest winners, if the Conservative Group vote this through at their meeting on Thursday:

It's clear now why Waldorf choked on his biscuit. Will Conservative Councillors really vote for electoral suicide, by in one night hiking Council Tax by 3% and huge increases in allowances for themselves? To do so will show a lack of political judgement so defective that next years elections will really be in the balance.

So come on Conservative Councillors, rebel, stand up, save your seats, tell Mike Freer and Lynne Hillan on Thursday, at your Group Meeting, that you will not vote for his Officer's big hike in expenses. Tell him that you want to show your solidarity with the voters and take a £500 cut this year in the basic allowance, lead by example. Now is not the time to gorge at the top table whilst the telling the voters to live on gruel.

P.S. Should any rotund individual tell you that you must be 100% loyal to Mike Freer, ask him how loyal he was to the previous two Leaders. You should never be as ferociously hostile as he was, but be your own person - your constituents expect it.

Off for some cocoa - gosh it's late.

Posted by Statler and Waldorf at 2:59 PM